The Ozarks (also referred to as Ozarks Mountain Country, and the Ozark Plateau) are a physiographic and geologic highland region of the central United States. It covers much of the southern half of Missouri and an extensive portion of northwestern and north central Arkansas. The region also extends westward into northeastern Oklahoma and extreme southeastern Kansas. 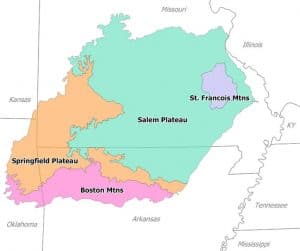 The Ozarks are called a mountain range, but keep in mind that the average elevation is from 1,000 to 2,000 feet above sea level. The highest elevation is found in the Boston Mountains, going up to 2,600 feet.  Even so, the biggest mountain in the Ozarks wouldn’t make a noticeable bump in the Rocky Mountains or the Alps.  But the Ozarks have huge advantages over those grand mountain ranges.  Being in the south there is very little snow and it usually melts the next day.  There are no noticeable earth quakes, never any hurricanes, no forest fires, no flooding except in low areas, long growing season, and lots of rain.  Tornadoes are rare in the mountainous areas. I grew up in Colorado and visited the Rockies a lot, but I would pick the Ozarks over the Rockies any day as the ideal place to live.  And especially in these troubled times.
These pictures were taken from the Gettyimages listing of pictures in the Ozarks. 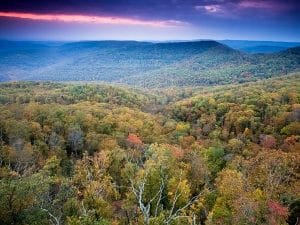 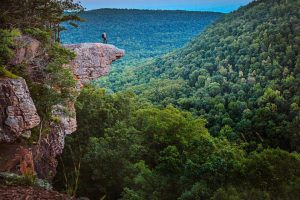 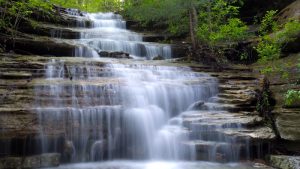 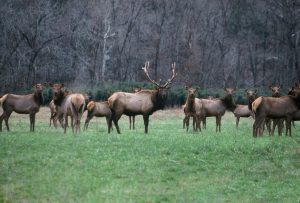 Look at this map of the USA again and notice the orange spot that signifies the Ozark aquifer (and two other much smaller aquifers).  Then notice how far away the gulf coast and pacific and Atlantic costs and the Canadian boarder are.  They are hundreds of miles away, isolating the Ozarks from any purported invasion of any sort that some predict.  This gives the Ozarks a huge advantage over all the other safe areas… in my estimation. 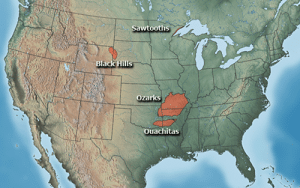 Statistically, nearly three quarters of Americans move every five years… so chances are pretty good that you could be relocating again. Obviously, moves are often driven by major life transitions, like a new job, a marriage, or retirement. And sometimes you don’t really have much of a choice in your destination.

But quite often, you do have a choice. And that’s important, because …

One of the very best things you can do to survive hard times is to move where the likelihood of major events affecting you is minimized.

There are plenty of places like that in the United States… as long as you think critically and evaluate your options using the right criteria.

It can be a matter of semantics as to what terms we use to define these relatively safe areas.  Here are some terms I have heard: safe spots spotted across the globe.  Safe areas, locations, divinely protected areas, places of refuge, Goshen, Arks, angel covering, hidden from danger, etc.

But the most descriptive term of all is … Green Island of Survival!